Peace Corps Connect to the Future: A vision of unparalleled scope for an unprecedented time 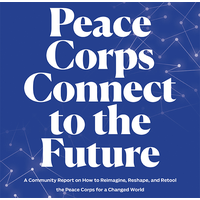 After all Peace Corps Volunteers were withdrawn from around the world in March 2020, an unprecedented community-driven effort has charted a course for how to reimagine, reshape, and retool the Peace Corps for a changed world.

Washington, D.C. (November 13, 2020) — Amid a time of unprecedented crisis for the Peace Corps and our nation as a whole, the Peace Corps community has come together to chart a way forward: with specific, actionable steps that will help reimagine and retool the Peace Corps for a changed world. Those steps are outlined in “Peace Corps Connect to the Future,” a report months in the making and made public today.

The report comes at an inflection point for the Peace Corps, which was founded in 1961 by President John F. Kennedy. Its mission of building world peace and friendship has motivated more than 240,000 Americans to volunteer in nearly every corner of the world. Peace Corps sets the gold standard for service, and its brand is a cultural icon with near universal recognition. But this year that service came to a halt.

In the spring of 2020, due to the COVID-19 pandemic, the Peace Corps evacuated all of its roughly 7,300 Volunteers from service around the globe. They came home to a country hit by pandemic and economic maelstrom, and soon one convulsed by protests against racial injustice.

“We heard loud and clear from the community that the Peace Corps needs to change and adapt if we want it to endure,” said Glenn Blumhorst, President and CEO of National Peace Corps Association. “That’s from Volunteers who have served across the decades and around the world, and from people who live in communities where the Peace Corps has worked.”

For the first time in the nearly 60-year history of the agency, no Peace Corps Volunteers are serving overseas. This abrupt interruption of Peace Corps service has dramatically altered the lives of the Volunteers, and it has profoundly disrupted the work and relationships in communities where they were serving. The global evacuation of Volunteers also brought to the fore some longstanding challenges for the agency and the broader Peace Corps community. All this called for an unparalleled response.

Harnessing the experience, commitment, and innovative ideas of the Peace Corps community, in July National Peace Corps Association convened a series of national community discussions and a global ideas summit to ask some far-reaching questions about the future of Peace Corps in a changed world. The conversations tackled two key questions. First, whether the Peace Corps as an agency should continue to exist; on that count, the response was a resounding “yes.” And second, when the Peace Corps returns to the field, what should it look like? The responses to this second question yielded the far-reaching report, “Peace Corps Connect to the Future.”

“We heard loud and clear from the community that the Peace Corps needs to change and adapt if we want it to endure,” said Glenn Blumhorst, President and CEO of National Peace Corps Association. “That’s from Volunteers who have served across the decades and around the world, and from people who live in communities where the Peace Corps has worked. They’ve offered big ideas in conversations about diversity, equity, and inclusion as well as recruitment and recalibrating programs, including critical health support. They’ve looked hard at the three goals of the Peace Corps agency, as well as policies, funding, and how Peace Corps communicates.”

“Peace Corps should reflect the fullness of America and provide the country’s best and truest face to the world,” the report notes. “It should return to the field better, bolder, more inclusive, and more effective.”

Each of the eight chapters of the report can stand alone with its own unique set of recommendations. But during the community conversations, it was made clear that three primary themes cut across the entirety of the issues Peace Corps faces:

This moment of international crisis and domestic change has provided a period of critical reflection to restructure, retool, renew commitment, and get things right. The Peace Corps must meet the challenge of this moment. And once more it can lead the way. “Peace Corps should reflect the fullness of America and provide the country’s best and truest face to the world,” the report notes. “It should return to the field better, bolder, more inclusive, and more effective.”

The Peace Corps agency has reported that partner nations have all asked for the return of Volunteers as soon as conditions permit. A small number of Volunteers are scheduled to return in early 2021. The first will be Cambodia and Saint Lucia, in January 2021, as Peace Corps Director Jody Olsen revealed on November 12 at a program hosted by The Commonwealth Club of California.

The act of Volunteers returning — or their arrival in countries for new programs — will signal that a country can engage internationally in a post-pandemic world.

The report takes as a touchstone some remarks by diplomat Kul Chandra Gautam at NPCA’s global ideas summit. Gautam was born and raised in Nepal, and as a student he was taught by Peace Corps teachers. His career has included serving as Deputy Executive Director of UNICEF. “Our increasingly interconnected world demands global solidarity, not charity, to solve global problems that transcend national borders like the specter of war, terrorism, racism, climate change, and pandemics like COVID-19,” he said. “I sincerely believe that the Peace Corps can be a great organization dedicated to promote such global solidarity at the people-to-people level.”

And here is a handy URL to share: bit.ly/peace-corps-connect-report

Steven Boyd Saum is Director of Strategic Communications for National Peace Corps Association. He served as a Volunteer in Ukraine 1994–96. For questions and interviews with Glenn Blumhorst, members of the report advisory council or steering committee, or former Peace Corps directors about this report, please contact news@peacecorpsconnect.org or (202) 934-1532.

In 2019 NPCA marked its 40th anniversary with a vibrant community of over 240,000 individuals and more than 180 affiliate groups. The affiliate groups are organized by city and region, country of service, places of employment, such as the Centers for Disease Control and Prevention, and around causes such as environmental action and work with refugees.