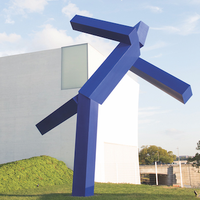 The Unruly Sculpture of Joel Shapiro

As a Peace Corps Volunteer in south India in the mid-1960s, Joel Shapiro taught villagers how to dig latrines, build smokeless ovens, and utilize night soil for more productive vegetable gardens, among other sustainability initiatives. More than 50 years later, his sculptures and works on paper are in the permanent collections of museums all over the world: New York City’s Museum of Modern Art, Metropolitan Museum of Art, and Whitney Museum of American Art; down south at the Nasher Sculpture Center in Dallas; out west at California’s Los Angeles County Museum of Art; and across the Atlantic at the Tate Gallery in London, the Moderna Museet in Stockholm, the Kunstmuseum in Winterthur, Switzerland, the Stedelijk in Amsterdam, and the Museé National d’Art Moderne in Paris.

He has also done two large commissions through the Foundation for Art and Preservation in Embassies. One, Conjunction, was installed in 1999 outside the U.S. Embassy in Ottawa, Ontario; and another, Now, was installed in 2013 outside the newly built U.S. Consulate in Guangzhou, China. In fall 2019, his monolithic Blue was installed on the campus of Washington, D.C.’s Kennedy Center for the Performing Arts. 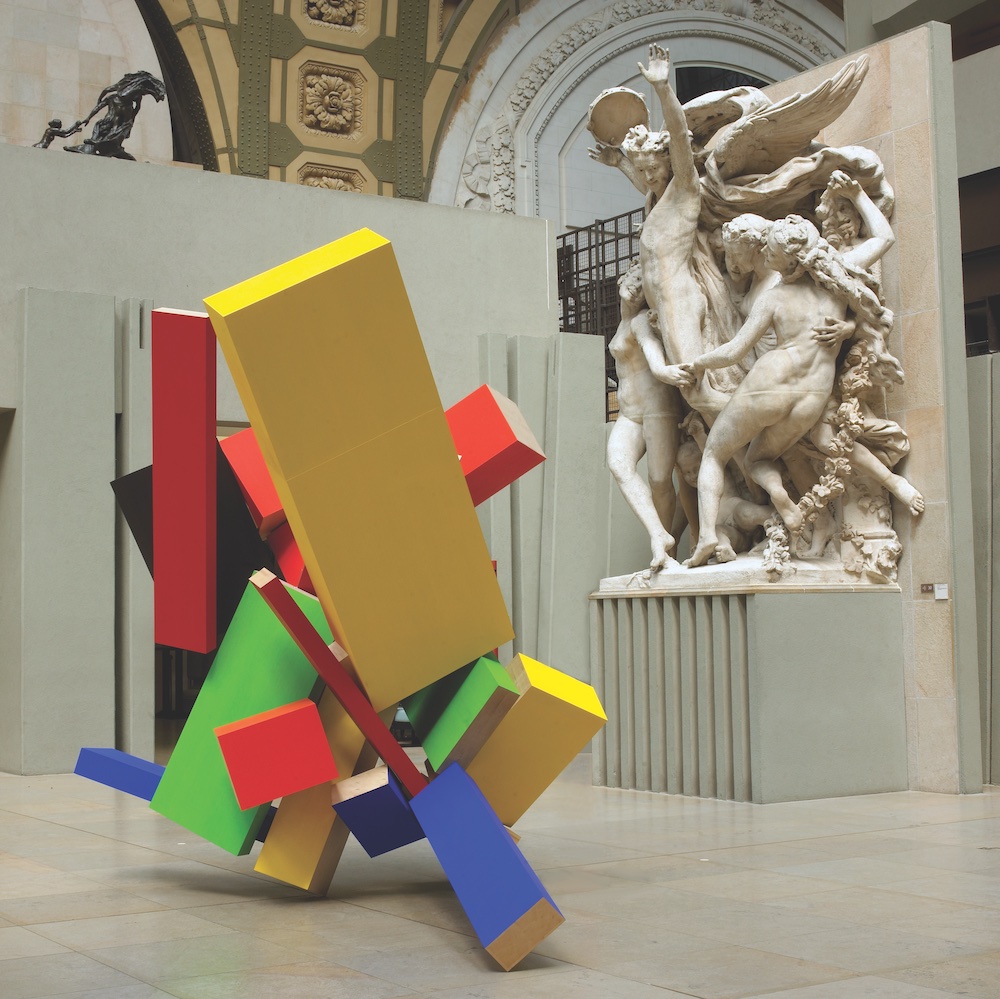 Like Blue, much of Shapiro’s sculpture is big, bold, and colorful. It appears to defy gravity and, if installed indoors, to climb gallery walls. Something seems to emerge — a thought, a feeling — from the way Shapiro joins the wood, bronze, or cast-iron elements of his sculptures. He says, “Perhaps they are metaphors for thought.”

Shapiro, who has been labeled a post-minimalist by some critics, was asked recently where his work fits in the current of modern and contemporary art in America. “It’s hard for me to locate myself,” he said in a soft voice punctuated with laughter. “I’d like to locate myself.” 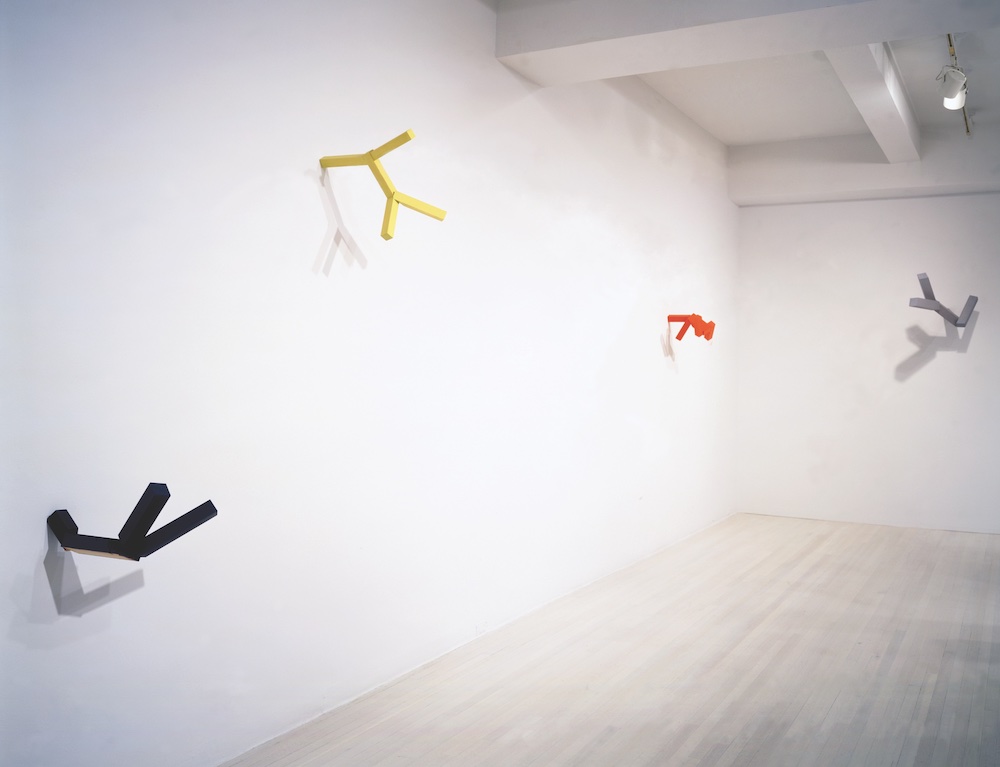 Shapiro began his career in New York City with a show in 1970, exhibiting small forms that rebelled against the then-dominant orthodoxy of minimalism. One of his first shows consisted of a ripped-up sculptor’s mannequin that he had strewn across the floor of an otherwise empty room of the Paula Cooper Gallery. “It was a moment of rage,” he says. “We were all bad boys.” For another show he insisted that a four-inch-tall milled cast-iron sculpture of a bridge be the only work in a vast room at the Clocktower, one of the first alternative spaces in New York and the precursor of Long Island City’s popular MoMA PS1.

“My first studio was on Broadway,” Shapiro recalls. “I remember ducking into a doorway during a full NYPD mounted police charge during an anti-war demonstration. It was a volatile time, and we were all swept up in it ... and there were no rules in the art world. Your work had to be hard and clear,” he says. “You make art of whatever you are feeling.” 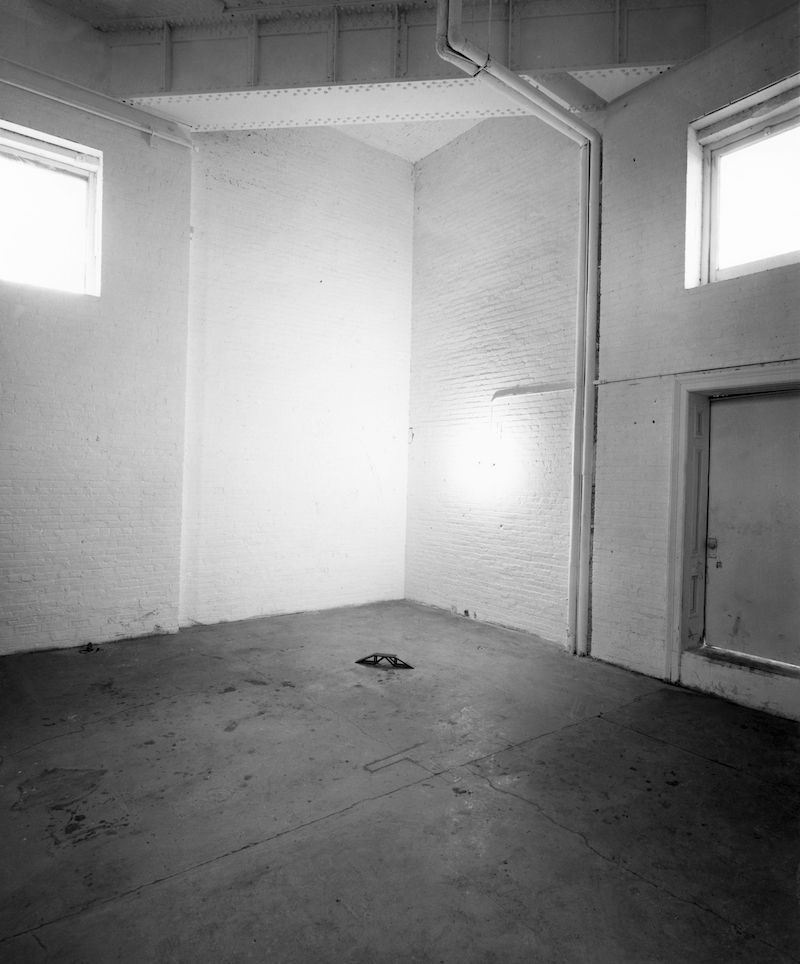 Shapiro has spent years experimenting with different materials, subjecting them to different processes in order to find meaningful form. “I often use simple forms. I can be more expressive and involved with the process without being held back by concerns of craft or depiction ... A projection of my state of mind, that is enough. The basic principle is to find a form that corresponds to what I’m thinking about. I’m still externalizing my thoughts, trying to conjure something up.” 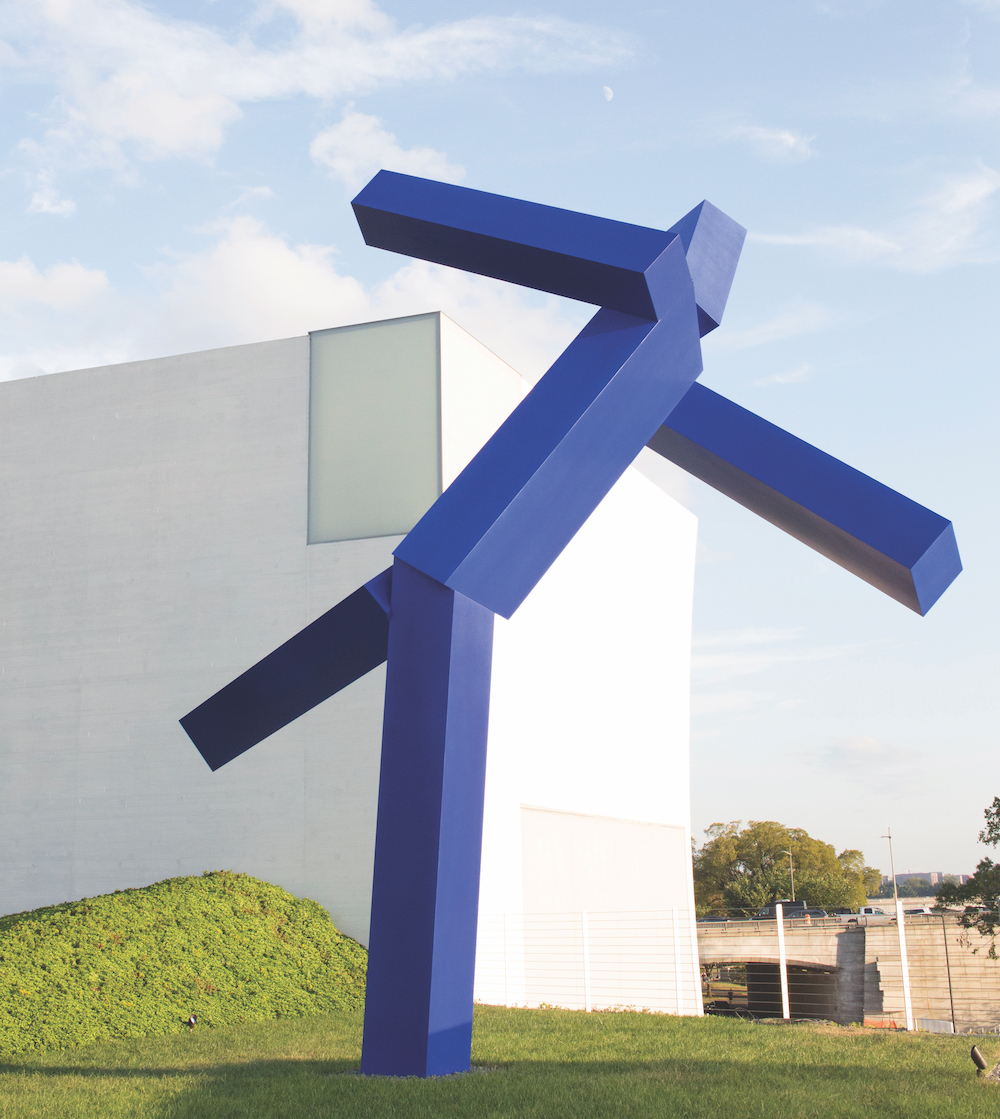 Blue, the enormous and exuberant figure that graces the grounds of the REACH at the Kennedy Center for the Performing Arts in Washington, D.C. Photo by Jonathan Boyd

In a recent monograph on his work, Joel Shapiro: Sculpture and Works on Paper 1969–2019, modern art historian Richard Shiff writes that Shapiro has “an expansive, volatile, and searching aesthetic temperament that has produced a half-century of work that is beyond classification.” The title of Shiff’s essay sums up the artist’s career: “The Unruly Joel Shapiro.”

A contemporary sculptor of equal renown, Martin Puryear, was inspired by the roadside wood carvers he encountered while serving as a Peace Corps Volunteer 1965–67 — virtually the same period as Shapiro, but in Sierra Leone. The two are friends, but Shapiro’s use of color and form is distinctly not based on the same process as Puryear’s. Shapiro is expert with a pin gun, nails, hot glue, and tools to notch and join. He does not carve in his craft; he assembles. According to Richard Shiff, part of Shapiro’s minimalism comes from his use of lumber, industrial metals, and other materials that lack “the fine-art aura.” 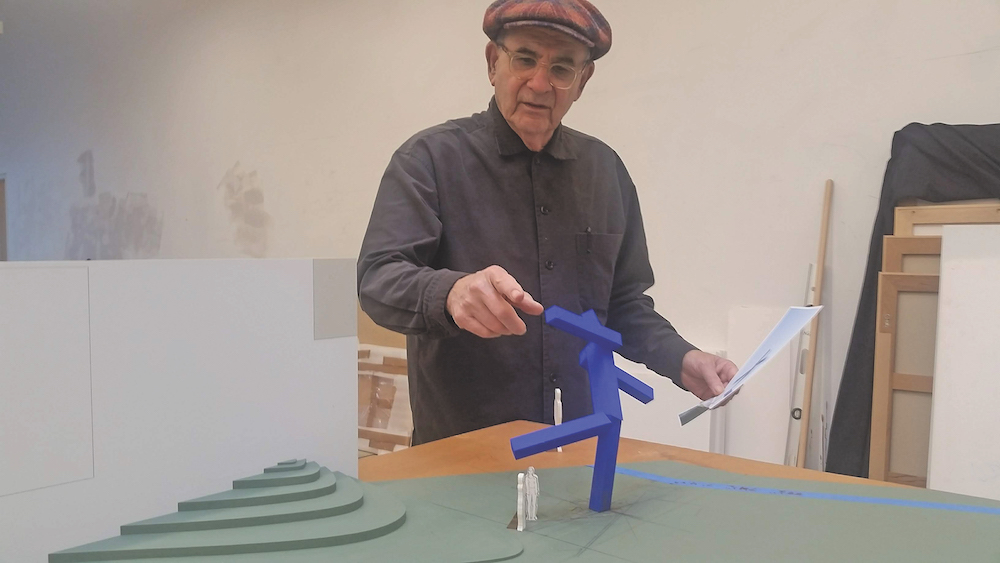 Joel Shapiro in his studio with one model of Blue. Photo by David Arnold

Shiff has watched Shapiro hold two pieces of wood in his hands, turn them in a variety of angles, and shoot pins into the wood to join them. He may pull one slightly out of joint to create a tilt of the head, perhaps an attitude of sadness, and shoot in more pins to fix the joining of the two pieces. By twists and turns, the pieces of wood achieve an attitude and a movement. Shapiro animates his figures by the way he joins the separate wooden pieces, which never lack an element of ambiguity. Shiff writes that a bronze figure of Shapiro’s that was mounted in a piazza in Rome in 1999, as part of a citywide exhibition organized by the American Academy in Rome, marches forward in a military fashion and skips gaily at the same time. From awkwardness “an unexpected grace emerges.”

Shapiro once told the curator of one of his European exhibits about the rules of unruliness. “It’s anti-planning. I take elements and add them, remove them, and add them again. It’s a way of working that has to do with contingency.”

And, of course, it’s a way of responding to some of his famous predecessors: Alberto Giacometti, Alexander Calder, Auguste Rodin, and Henri Matisse.

Outside looking in: Installation view of the show Joel Shapiro at Nasher Sculpture Center, Dallas, Texas, in 2016. Photo by Kevin Todora

Decades later, art’s bad boy of the ’70s is a genial host, plainspoken about his past, and still uncertain about what comes next. Shapiro is unpretentious in discussing his work, often calling it “stuff.” On a chilly October day he sits in a large living area on the top floor of his three-story studio in Queens. A full wall of windows overlooks the East River and the majestic skyline of Manhattan. Shapiro and his wife, the painter Ellen Phelan, share the workspaces below. Smells of their work permeate the building: linseed oil on one level, fresh-cut wood on the next. The historic brick structure is in an industrial neighborhood in the shadow of the golden-trestled Queensboro Bridge that feeds Long Islanders into Manhattan every morning. The building was constructed as an electrical substation that powered the trolleys that originally went across the bridge. Now there are tables laden with pin guns, glues, scraps of lumber. Shelves on white walls display working models of predecessors to Blue, some of which may be utilized for future works, or to make the forms for larger pieces that will be cast in nearby foundries.

The studio is less than two miles from the Sunnyside elementary school Shapiro attended in the 1950s. In high school Shapiro knew he had talent when it came to making art. “That’s all I could really do,” he says. The son of a physician and an immunologist, he finished undergraduate studies at NYU and then jumped at the chance to leave home. “I couldn’t wait to get out of there. I was a kid, 21 or 22.”

In 1964 he was sent to India with a group of Peace Corps Volunteers to work at primary teacher-training institutes that were inspired by Mahatma Gandhi’s prescient ideas of self-sufficiency. The Volunteers would often spend three to four months at one school before moving to another. With breaks between each relocation, Shapiro had ample time to travel and immerse himself in the art and architecture of the subcontinent. And, over the two years he served as a Volunteer in India, Shapiro broadened his aesthetic horizons. “I had fun,” he recalls. “I was exposed to cultures so far removed from what I had known previously. I think the thing that struck me most in India was how the architecture, the sculpture, the music — how it all seemed to be part of a complete system that seemed to describe basic human — and I would say now, universal — needs.”

Where do his ideas and his art take him now? “I’ve been at this for 50 years. Lately I’ve been showing a lot of older work, but I am eager to be making new, hopefully more radical work. I’m interested in rapture.” 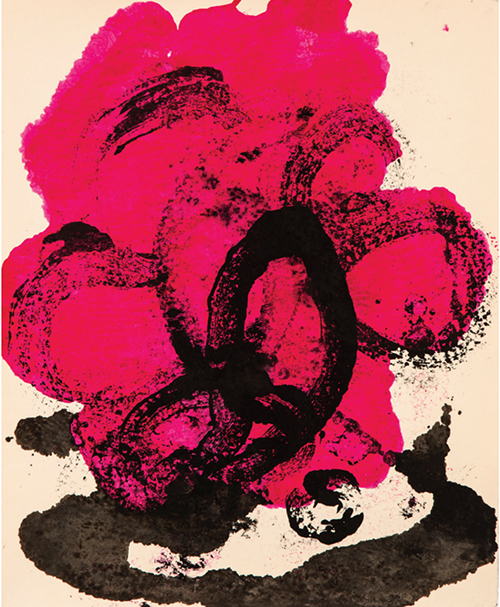 Blue, his recent gift to the Kennedy Center for the Performing Arts, was installed on the campus of the REACH, a new extension of D.C.’s major national performing arts venue. Shapiro’s monumental aluminum sculpture is about to run, to leap, or to kick an illusory soccer ball across the wide Potomac to Robert E. Lee’s estate on the Virginia hilltop above Arlington National Cemetery.

Shapiro wanted Blue to be buoyant and performative. “It’s about motion, a celebration of the optimism of the REACH. There’s nothing solemn about it.”

It’s a departure, then, from Shapiro’s commissioned work, Loss and Regeneration, that was installed at the nearby Holocaust Memorial Museum in 1993. Consisting of a pair of massive bronze forms, one of which appears to be a figure at once falling and soaring and the other a house blown back and turned upside down, perched on the apex of its roof, that sculpture is dedicated to the memory of the more than 1 million children who perished in that years-long genocide. 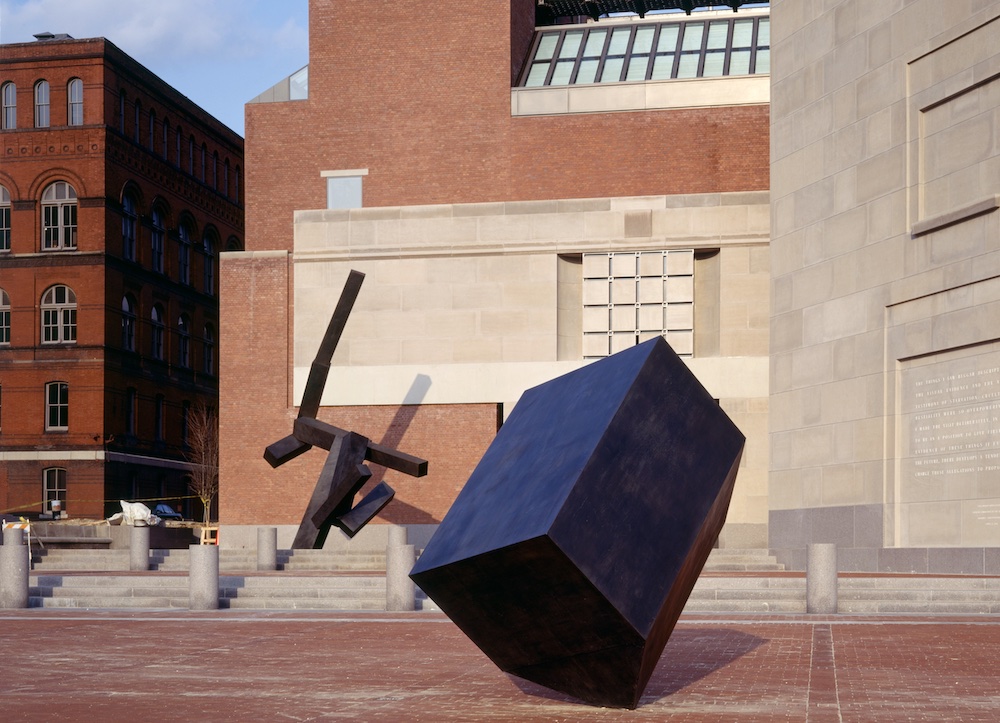 Loss and Regeneration, 1993, a bronze figure and house at the United States Holocaust Memorial Museum. Photo by Wojtek Naczas

Blue is an exuberant and uplifting expression of the Peace Corps that its creator, President John Kennedy, envisioned. Blue was unveiled during the opening of the REACH in September 2019, when thousands of visitors explored the center’s new Peace Corps Gallery, a venue that honors the six-decade legacy of the agency and its mission. Many of those visitors also filled a theater in the Kennedy Center for the world premiere of the new Peace Corps film documentary “A Towering Task.”

When the center opened, Shapiro spoke of Blue as embracing action and risk, performance and possibility. Under the open sky, on the ground where people stood, what you saw of Blue would change depending on where you stood; it was about movement for the viewer, too. Two years later, the Kennedy Center reopens — and we face a newly complex and troubled world, with all of the uncertainties that the pandemic has brought. A sense of optimism and possibility here on the banks of the Potomac is welcome indeed.

David Arnold served in Ethiopia 1964–66 and is editor emeritus of WorldView magazine.